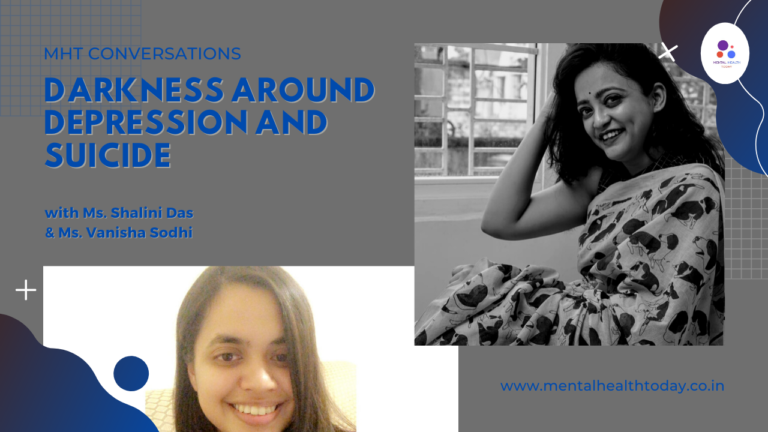 Depression is a mental illness that is mainly characterized by persistent sadness and loss of interest in activities that one normally enjoys. In India, while mental health is still something that is not taken seriously, people have slowly and gradually started realizing the importance of this subject and it is becoming a more talked about topic especially amongst the younger age groups and a conscious effort has been made to spread its awareness.

While depression is becoming a topic of discussion, suicide, which can be an outcome of depression is still something that most people are either unaware of or fail to believe in. Usually, when suicide accompanies depression it is usually blamed on other factors other than the main culprit, that is, depression.

In this MHT conversation, Ms. Shalini Das talks about her journey of getting diagnosed with depression at a very early age and later being told that it’s not just depression but it’s the recurrent depression that she suffers from. Shalini’s parents being disconnected from the rest of their family was the starting point of Shalini wanting a normal family life, something that she never had and hanging on it wherever she could find it. In her struggle of finding what was “normal” for everyone else led her to become a people pleaser to the extent where she did not know what she wanted or who she was.

In these continued struggles, when Shalini went through her first big break up, she made her first suicide attempt at a very young age of 18 years. That incident made her realize that depression is not one single disease that happens to the brain but it’s almost a spectrum that contains different kinds of depression which generally most of us fail to notice or even ask about. It also made her realize that there were a lot of issues that she was not dealing with and was displacing them on other people

Shalini made her second suicide attempt when she felt she was carrying a lot of baggage from her past and could not carry the burden further. She lost all courage to live and decided to make another attempt at taking her own life. However, this time when she was saved, through the help of a supportive doctor she realized she needs to seek out therapy again, give it another chance, and thus giving life another chance. Through these continued struggles Shalini realized that she had been seeking validation from the wrong kind of people and furthermore realized that her own happiness was of utmost importance than anyone else’s.

Ms. Shalini Das is a travel journalist and a marketing consultant based out of Bombay. She has traveled to 16 states and 3 union territories and written about some offbeat places and her work has also published in some great magazines and newspapers like Deccan chronicle and Entrepreneur of India.

In the times when we feel that darkness is ever-encompassing all around us, what if we had a way to repel the darkness away and substitute it with some glow? Bag this Repel Darkness T-shirt by MHT India and glow every time the darkness surrounds you.

MHT Conversations has been conceptualized with the aim to create a safe place for our speakers that is free of any kind of judgments. It is an online space where anybody from the mental health community or otherwise can come together and converse about topics that are relevant to the field of mental health. Ranging from personal anecdotes, struggles with mental illness, surviving through different low points in one’s life to experts giving their views on different therapies, disorders and even stigma related to the field, MHT Conversations includes it all and beyond.

These conversations are recorded at the time convenient to the speaker/s and published on the website only after obtaining appropriate consent. Mental Health Today takes pride in being an all-inclusive platform and invites all individuals, regardless of their caste, race, colour, sexual orientation, religion or gender to come on board MHT Conversations and help us in building an all-accepting community.

The recordings of MHT Conversations, along with short clips from the same, are also streamed on all of the MHT India’s social media platforms:

Subscribe to MHT India and become a part of the community. Get weekly updates on new MHT Blogs, MHT Podcasts and MHT Webinars from Mental Health Today. If you are seeking the help of a professional, explore the MHT Directory and find an expert can support your needs and requirements. Explore various products at MHT Store that can assist you to overcome your emotional or psychological or mental health problems.

Just like our today’s title talks about the darkness around depression and suicide if you want to repel darkness make sure to check out this cool Repel Darkness t-shirt available at the MHT store where you can find about more products offered by MHT.

Team MHT India hopes you found this conversation helpful and informative. Stay tuned for more such content coming up. Kindly like, share and subscribe to MHT India’s social media handles. If you wish to join as a speaker for our next conversation, kindly send us an email at: