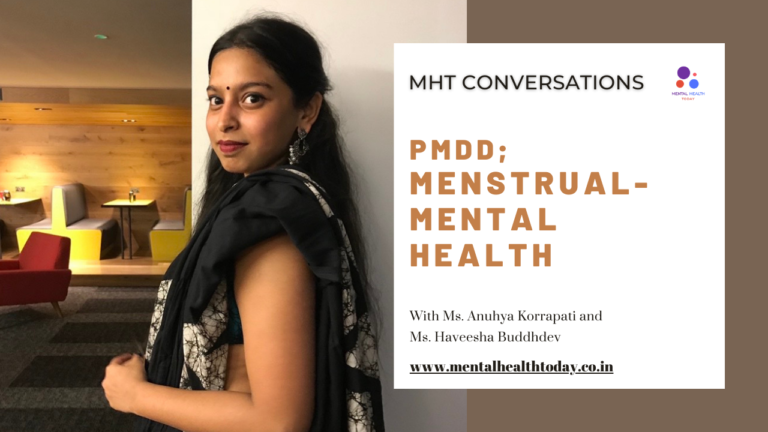 PMDD vs PMS and their effects on one’s mental health. Menstrual health has been under the scrutiny for hundreds of years but it is only in recent times that we have started acknowledging and accepting the emotional, psychological and physical conditions that are a part and parcel of this natural phenomenon that affects half the population on Earth.

In this MHT conversation, we talk to Ms. Anuhya Korrapati, founder BloodBeyond, who shared her insights and expertise on menstrual mental health and pmdd.

Premenstrual dysphoric disorder (PMDD) is a severe, sometimes disabling extension of premenstrual syndrome (PMS). Although PMS and PMDD both have physical and emotional symptoms, PMDD causes extreme mood shifts that can disrupt daily life and damage relationships. In both PMDD and PMS, symptoms usually begin seven to 10 days before the period starts and continue for the first few days of the period.

Both PMDD and PMS may cause bloating, breast tenderness, fatigue, and changes in sleep and eating habits. In the former, however, at least one of these emotional and behavioral symptoms stands out:

PMDD statistics indicate that 6 million, or 1 in 20 women worldwide, struggle with this condition. The actual prevalence is estimated to be even higher, but many women may not come forward regarding their concerns because of fear of stigmatization. The average age of onset for Premenstrual dysphoric disorder is 26, but the condition can emerge at any time during a woman’s reproductive years.

Ms. Anuhya Korrapati is a JRF Doctoral Fellow at Christ University, Bengaluru who received her MSc in Health Economics from the University of York and a recipient of the Postgraduate York Gold Award 2019. She had a brief stint at the Centre for Health Economics, York before moving back to India.

She is the founder of BeyondBlood (An organization that initiated an inclusive menstrual-mental health movement to spotlight PMDD and PME). She also sits on the Youth Advisory Board and Patient Insight Panel with IAPMD, USA and is the joint secretary at Indian Health Economics and Policy Association.

As a Policy Fellow at YLAC, she was part of a four-member team that drafted the Menstruation Benefit Bill 2018 for the office of Mr. Ninong Ering, Member of Parliament (Lok Sabha) and created an advocacy campaign for menstrual leave.

Her current research focuses on medical gaslighting, benevolent sexism, and menstrual-health seeking behavior of women and girls under the backdrop of the Indian health system. Some of her academic interests include heterodox perspectives, feminist economics, class-caste-gender intersectionality in health, feminist and decolonizing methodologies.

BeyondBlood is a registered Not-For-Profit under the Andhra Pradesh Societies Registration Act, 2001 that initiated the Menstrual-Mental Movement to highlight the connection between menstruation and mental health with a special focus on PMDD through our Flagship PMDD Advocacy Program.

Here at BeyondBlood, we are driven by a single goal; to enable high quality, comprehensive, evidence-based health information on disorders that particularly affect menstruators through a lifecycle approach to menstruation.

The Mind Alcove App comes with features such as journaling and mood tracking. With the help of journaling and mood tracking, parents of children with autism can understand their moods and emotions better at a go of a click. Upon gaining more awareness about self, one can take better decisions, avoid triggers causing negative moods and thereby improve their quality of life.

Download the app from your PlayStore or AppStore and take better care of your thoughts and emotions whenever parenting gets challenging and cumbersome.

Do you think you are irritated and moody before, during or after your periods? Something more serious might be at play, instead of just mood swings. Click here to talk to a professional now. MHT Directory has a list of professionals who are skilled to help you through these ups and downs and also come up with effective strategies to address the same.