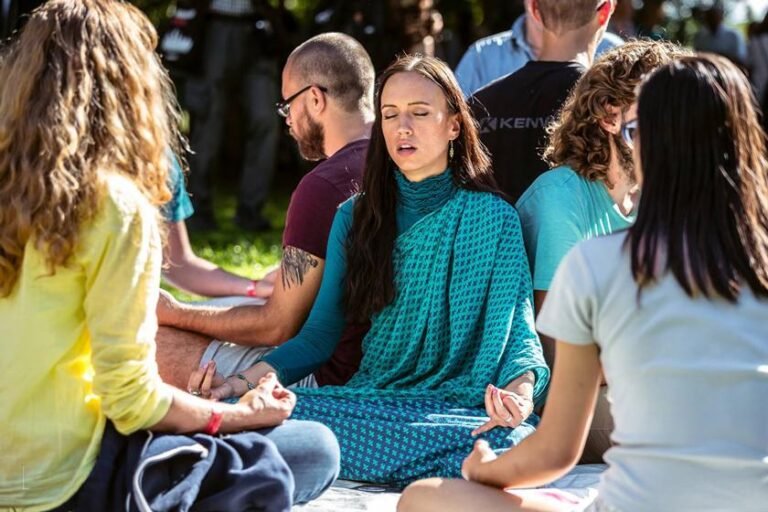 Chanting is a form of meditation with similar psychological benefits as that of mindfulness. The practice of chanting constitutes a part of many religious practises in culture across the globe such as African, Native American, Vedic as well as Jewish. Even today, chants have been used in various rituals of cultures and are prevalent in events such as Football (football chant) or school assemblies and more.

In the past two decades, many researchers have studied psychological, neurological as well as mental health benefits of chanting. Some of these benefits are specified below.

A research study conducted by a team at the University of Pennsylvania found that Mantra based chanting had effects on patients with memory loss. Brain scans of the participants were conducted before and after eight weeks of practising mantra based chanting. After eight weeks, these participants showed significant increase in the cerebral blood flow in various parts of the brain. These participants also showed improvement on neuropsychological assessments measures such as visuospatial memory and verbal memory.

The Alzheimer’s Prevention Foundation suggests Kriya Kirtan meditation, a form of chanting meditation, on its website as an easy and simple way for the elderly to practice brain stimulation exercises that can reduce the risk of memory related issues.

Chanting is a practise of reciting a specific word, phrase, syllable, mantra or hymn, religious or non religious, either vocally or silently. This ritual disables the mind from wandering and lets it focus on a specific stimulus. Just like meditation, similar effects are observed in terms of improvement of focus and attention.

A research study conducted by the Warwick Research Services, UK, has also found benefits of Vedic Chants in children at risk of Attention Deficit Hyperactivity Disorder (ADHD). In this study, children not only showed improvement in ADHD symptoms but also better behaviour towards their peers as reported by their parents.

Another great benefit of chanting is its effect on mood and stress. A study on “Kriya Kirtan” by a team at the University of West Virginia found that participants who engaged in reciting the mantra of Kriya Kirtan for 12 minutes a day for a period of 12 weeks showed improvement in sleep, mood and quality of life.

A systematic review by Lynch et al. also found similar results. The team of researchers at the Royal College of Physicians of Ireland studied 37 research papers and found a significant effect of mantra chanting on levels of anxiety, stress, psychological distress, depression, burnout and even anger.

Chanting and meditation is widely practiced by individuals who face anger issues. Another field of research that has shown tremendous results of chanting for people who wish to learn anger management.

The importance of meditation has been recognised by people across the globe. Mental health professionals strongly advise their clients and patients to practise mediation according to the style or form that suits them the most. Chanting is one of the many forms of meditation and practising it can guarantee psychological benefits such as cognitive functions, attention, mood and anger that further more assist good mental health.

How to Practice Chanting based Meditation?

Happy Chant is a revolutionary App designed to help people improve their lives through pleasant mindfulness techniques, such as meditation and chanting of mantras.

The Happy Chant App helps its users cope with stress, anxiety, a lack of concentration and much more. It doesn’t matter if you’re just a beginner or full-fledged mindfulness expert, the system is based on merits and progression: HappyChant App wants to encourage everyone to be constant, so that they will be able to enjoy more and more mental and physical benefits.

The mobile app is available on both Apple and Android Stores. Find out more about the HappyChant App here.

The Mangal Maitri Chant Wheel consists of a beautiful stick with a rotating top, both made from naturally seasoned teak wood. The top has the Mangal Maitri Chant, a deep healing and wellness prayer engraved on the outer surface; as well as written on a paper, rolled and inserted on the inside surface to double the impact of the striking words that make up the prayer.

Rotate the Mangal Maitri Chant Wheel and chant the prayer or repeat the line, Aloud or in thoughts, ‘Mera Mangal, Tera Mangal, Sabka Mangal Hoy Re’ or ‘May I be happy, May you be happy, May all beings be happy’. By doing so, you are sending out positive, happy and healing vibrations to yourself and to the universe. Do this frequently, every day and at any time with mindfulness in a way to solidify peace, prosperity, happiness and wellness within and around you.