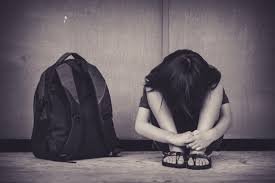 Education System in India is very academic oriented leading to suicidal behavior in students. Importance to marks, grades and ranks is given more than to what actually is being taught and what the student is learning. There are various warning signs for students’ mental health in such a demanding education system. It is very textbook oriented, encouraging rote learning which takes away many hours of a student per day. Also the definition of success in India is achieving higher grades throughout the school and college time and then getting a good highly paid job or becoming the best in whatever field one chooses.

Even such decisions like those of where to study, which field to take, what to pursue, where to take up a job, what kind of job, etc. are induced by parents and teachers leaving very less individuality for adolescents to decide anything. Taking up a career is still a later question; even choosing friends for their children is a very common habit of parents in India. Teachers and parents both compare students with those who score higher, forming hatred among them instead of friendship. These competitions, comparisons, parental pressure and hatred leads to nothing but stress, anxiety and low self concept (Deb, Strodi & Sun, 2015).

Such a system leads to high expectations from students leaving a very little opportunity for socialization, recreation and self-control. According to Bhogle (2012), Indian education system is such that stress is an essential part of it. Students in India have reported to go through various issues when it comes to their education. Many adolescent students are taken to psychiatric units of hospitals for school related distress and as stated in a study by Deb, et al., (2015) suicide is one of the biggest and most severe issues faced by Indian education system.

Statistics of student suicides in India:

As reported by National Crime Records Bureau (NCRB) data, there were twenty two students committing suicide every 24 hours in 2018. This was the highest number of suicides among students in a decade where India lost around 82,000 students.

On the whole, there were about 1.3 Lakh suicides in India that year out of which 8% were students who decided to take their lives and a quarter of them did so due to “Failure in Exams”. Causes of other students committing suicide have been reported as being a mixture of depression, parental pressure, family seperation and relationship breakups.

Reasons for Suicidal Behavior in students:

Apart from statistical analysis, when looked at these suiced psychologically, most psychologists like Deb et al., (2008) and Bhogle (2012) suggest that students commit suicide due to increasing parental expectations, peer pressure, high competition, teachers’ expectations, etc. propelling them to reach their breaking point. Kouzma and Kennedy (2002) suggested that tests, studying, grades, induced need to succeed by others etc., are certain school situations that cause high amounts of stress in students, irrespective of their culture or environment.

Such a situation makes it difficult to believe that education increases the well being of young people. Instead of increasing the standard of living, Indian education system is increasing the mental and behavioural adversities in students. Problems like anxiety of scoring less and not meeting the expectations, depression due to not being able to achieve what was expected from them and other mental health problems are also very evident in Indian students (Deb et al., 2015). This view is also supported by saying that fear of failing in school is induced by teachers and parents in India to an extent that students suffer from immense amount of academic stress leaving aside all other adolescent emotional and physical needs (Varma, 1998).

What can be done to decrease Suicidal Behavior in students?

In order to improve the statistics mentioned above, the root cause of the school related stress should be treated. It is very important for the educational system, parents, teachers and students themselves to understand and promote that attaining good marks in examination is not the only definition of success (Bhogle, 2012). Today’s education should focus on the holistic development of a student.

The education system should not neglect the student’s social and emotional development as this would mean wasting education’s most priced resource – the student. It has become very necessary to make Indian education such that it gives importance to students and not their grades. Education ideally should be a transformative experience and not a rigid, stressful event in their life (Timothy, 2012).

Having said that, the release of National Education Policy 2020 which aims at universalization of education from preschool to secondary level with 100% GER in school education by the year 2030, seems very optimistic in this aspect. It is meant to make the education system stand on foundational pillars- Access, Equity, Quality, Affordability and Accountability to reach the goal of making the Indian Education System holistic, flexible, multidisciplinary and suited to the needs of a 21st century world. We can take this as a ray of hope for decrease in statistics of student suicides in India.

Ms. Haveesha Buddhdev, founder of Sveekrti is a counselling psychologist, REBT therapist and a special educator.
She is working as a School Psychologist for the past 2 years. Her expertise is in dealing with special needs children, training teachers, parents and other students to make a safe environment for everyone at school and home.
She practices part-time to provide counselling to adults for any adjustment, stress or emotional concerns and teaches special needs children. She wishes to reach out to as many as possible to encourage everyone to talk about their mental health.